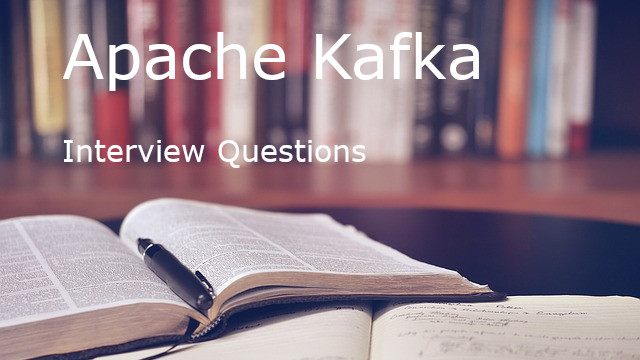 Kafka was originally develop at LinkedIn and was subsequently open sourced to the Apache software foundation in 2011. Kafka is now widely used across enterprises including in companies such as Apple, eBay, Pintrest, Uber, Netflix, Walmart and many more.

Below are some frequently asked Kafka interview questions in these categories.

What is Apache Kafka?

Apache Kafka is a distributed streaming platform that provides the following key capabilities.

Storage - Kafka by default stores streams of data in a distributed, replicated and fault-tolerant cluster. Data written to Kafka is written to disk and replicated across servers in the Kafka cluster for fault-tolerance. Kafka allows consumers to read from specific location on Kafka topics. This makes Kafka a good storage and distributed file system.

Traditional architectures usually start simple with a few systems, with point-to-point data exchange integrations between them, and a data lake or data warehouse to which data is sourced through ETL processes.

Kafka is a distributed messaging system, where multiple systems can post messages to and consume messages from. So instead of the point-to-point data exchange integrations between systems in the traditional architecture, data can be exchanged globally across systems using Kafka. This leads to a stable, and scalable architecture - with minimum protocols, minimum data exchange formats, and fewer failure points.

What are some use cases where Kafka can be used?

Following are some of the key use cases where Kafka can be used.

1. Messaging - Kafka can be used in distributed messaging systems, instead of message brokers such as IBM MQ, ActiveMQ, or RabbitMQ.

2. Log Aggregation - Kafka can be used to aggregate logs from different servers and put in a central location. This is comparable to other log-centric systems like Scribe and Flume.

Commit log - Kafka can be used as an external commit-log for nodes of a distributed system. This is comparable to Apache Bookkeeper.

What are the key components of Kafka?

1. Kafka Cluster - Kafka cluster contains one or more Kafka brokers (servers) and balances the load across these brokers.

2. Kafka Broker - Kafka broker contains one or more Kafka topics. Kafka brokers are stateless and can handle TBs of messages and, thousands of reads and writes without impacting performance.

3. Kafka Topics - Kafka topics are categories or feeds to which streams of messages are published to. Every topic has an associated log on disk where the message streams are stored.

5. Kafka Offsets - Messages in Kafka partitions are assigned sequential id number called the offset. The offset identifies each record location within the partition. Messages can be retrieved from a partition based on its offset.

6. Kafka Producers - Kafka producers are client applications or programs that post messages to a Kafka topic.

7. Kafka Consumers - Kafka consumers are client applications or programs that read messages from a Kafka topic.

What are Kafka Topics?

What is the retention policy for Kafka records in a Kafka cluster?

What is replication factor?

Replication factor specifies the number of copies that each partition of a topic will have.

You define the replication factor when you create the topic.

How are Kafka Topic partitions distributed in a Kafka cluster?

Partitions of the Kafka Topic logs are distributed over multiple servers in the Kafka cluster. Each partition is replicated across a configurable number of servers for fault tolerance.

Every partition has one server that acts as the 'leader' and zero or more servers that act as 'followers'. The leader handles the reads and writes to a partition, and the followers passively replicate the data from the leader.

If the leader fails, then one of the followers automatically take the role as the 'leader'.

What is an in-sync replica (ISR)?

What is the significance of acks setting on a Kafka producer?

The acks (Acknowledgments) setting on a producer specifies the number of brokers that the messages must be committed to, for the producer to consider the write as successful.

acks=all - Producer considers the write to be successful only after the message is committed to all the in-sync replicas.

What is the significance of min.insync.replicas setting on a Kafka broker?

The min.insync.replicas setting on the Kafka broker specifies the minimum number of in-sync replicas that must exist for the broker to accept and process ack=all requests. If the number of in-sync replicas are less than what is specified by the min.insync.replicas property then all the ack=all requests will be rejected by the broker.

What is the difference between Kafka and a traditional JMS messaging system?

Following are the key differences between Kafka and a traditional JMS messaging system.

Data Retention - In traditional messaging systems, the message is deleted once it is consumed by the consumers. In Kafka the messages are retained based on a configurable retention period.

Order - In traditional messaging systems, messages are maintained in the order that they are put into the queue. Kafka maintains the order, but messages can be consumed from any position by specifying the sequence.

How is Kafka used as a storage system?

Replication - Data written to Kafka topics are by design partitioned and replicated across servers for fault-tolerance.

Guaranteed - Kafka sends acknowledgment to Kafka producers after data is fully replicated across all the servers, hence guaranteeing that the data is persisted to the servers.

Scalability - The way Kafka uses disk structures enables them to scale well. Kafka performs the same irrespective of the size of the persistent data on the server.

How is Kafka used as a stream processing?

What is the role of Zookeeper in Apache Kafka framework?

1. Manages cluster memberships - Zookeeper maintains, and keep track of the status, of all the brokers that are a part of the cluster.

4. Manages the service discovery of brokers - Each broker knows about all the other brokers in the cluster. If a broker comes down, or if a new broker is added. Zookeeper communicates this to each broker in the cluster.

How do you create a topic using the Kafka command line client?

You can create a topic using Kafka command line client using the script kafka-topics.sh with the --create option using parameters for replication factor, number of partitions, and the topic name.

Below code create a topic named 'test_topic' with a replication factor of 3 and 1 partition.

How do you send messages to a Kafka topic using Kafka command line client?

Kafka comes with a command line client and a producer script kafka-console-producer.sh that can be used to take messages from standard input on console and post them as messages to a Kafka queue.

How do you consume messages from a Kafka topic and output the messages to console using Kafka command line client?

Kafka comes with a command line client and a consumer script kafka-console-producer.sh that can be used to consume messages from a Kafka topic and output them to the standard console.

What are the core APIs provided in Kafka platform?

Producer API - An application uses the Kafka producer API to publish a stream of records to one or more Kafka topics.

Consumer API - An application uses the Kafka consumer API to subscribe to one or more Kafka topics and consume streams of records.

What are the keys steps in a Java program using Kafka Producer API?

Following are the key steps in a Java program using Kafka Producer API.

2. Create a new instance of KafkaProducer class, passing in the properties created in step 1.

3. Create a new instance of ProducerRecord, passing in the topic name to connect to, the key, and the message.

4. Send message by calling the method send() on the KafkaProducer instance, passing the ProducerRecord instance containing the message to be send. 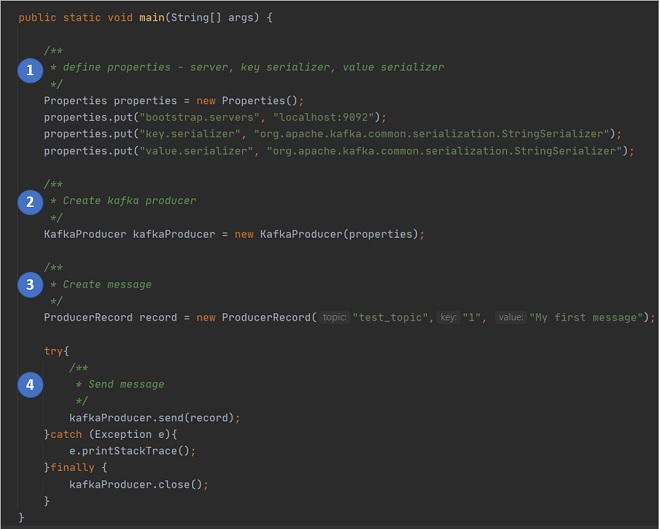 What are the keys steps in a Java program using Kafka Consumer API?

Following are the key steps in a Java program using Kafka Consumer API.

2. Create a new instance of KafkaConsumer class, passing in the properties created in step 1.

3. Subscribe to the topic to consume messages from, by calling the subscribe() method on the KafkaConsumer instance.

4. Listen to the kafka topic for new messages by calling the method poll() on KafkaConsumer instance, handling messages as instances of ConsumerRecord instances. 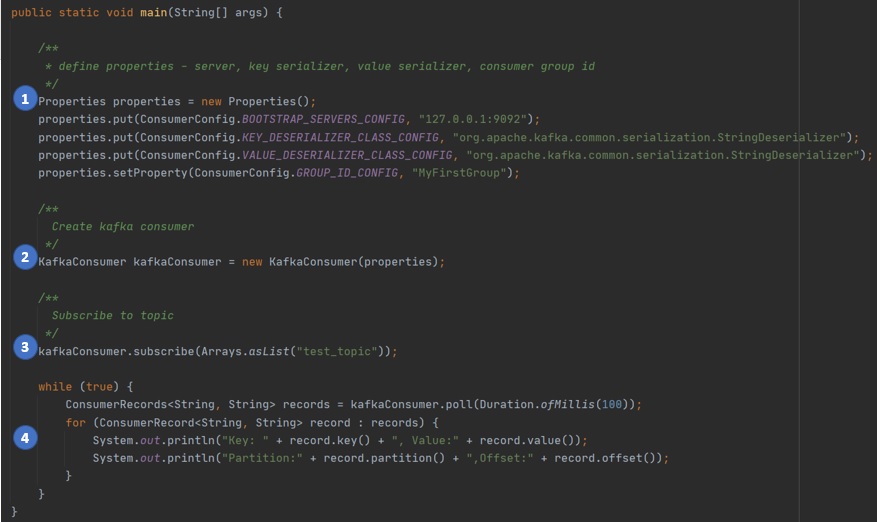 What security features does Kafka provide?

1. Authentication of connections from clients (producers and consumers) to brokers, using SASL mechanisms.

2. Authentication of connections from brokers to ZooKeeper.

3. SSL Encryption of data transferred between clients and brokers, brokers and ZooKeeper, and between brokers.

4. Authorization of read and write operations by clients.

What is Kafka Connect?

Kafka Connect is a tool to stream data between Kafka and other systems scalably and reliably. Kafka Connect defines a common framework for Kafka connectors, can be deployed in distributed or standalone modes, and is ideal for bridging streaming and batch data systems.

What is Kafka Streams?

What happens if a Kafka producer posts a message to a topic that does not exist?

If a Kafka producer posts a message to a topic that does not exist, then Kafka platform creates that topic, with a default of 1 partition and 1 replication factor.

Can you create a Kafka topic with replication factor greater than the number of brokers in the Kafka cluster?

No, you cannot create a Kafka topic with a replication factor greater than the number of brokers in the Kafka cluster.

For example, if you only have 3 brokers in the cluster and you try to create a topic with a replication factor of 5, then you would see an error like..

How do you setup a multi-broker Kafka cluster?

To setup a multi-broker Kafka cluster you have to do the following 3 tasks.

3. Start the servers in the cluster one by one using the property file of each server. 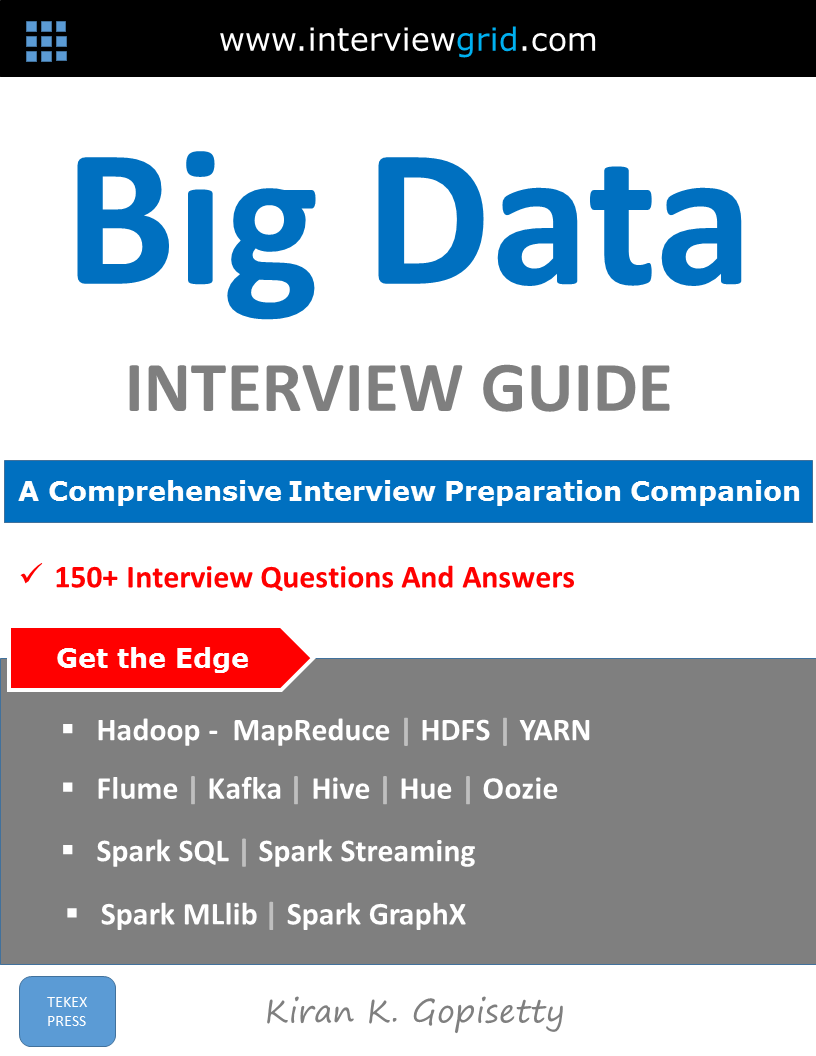 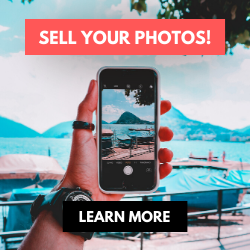